From the early days analog radio receivers to the superheterodyne channelized receivers today many things have changed. Nowadays, different technologies are in use and the capabilities have grown immensely. This article will give you a brief overview of the development of radio receivers. Furthermore, it will show how channelization has made it possible to use one radio receiver to listen to many different radio stations simultaneously.

In modern telecommunications, a point-to-point communication medium can be shared between multiple transmitters in various ways. For example, many different telephone calls can be transferred simultaneously via the same wire. In this case, each telephone conversation can be considered as a separate channel on this medium. Another example are traditional TV or Radio stations which are transmitted through different channels at the same time.

A signal in its original form at the transmitter side is called a baseband signal. This could, for example, be an audio signal which may take up to 20kHz of bandwidth. However, sending lots of different signals in baseband form would not be possible since data from different sources would overlap and it would not be possible to distinguish them from one another. A better way of sending data would be through use of different modulations. Modulations use various mathematical formulas to translate a baseband signal to a signal centered at a carrier frequency of a, for example, radio station. The result of this is a frequency channel.

Modulated signals take specific bandwidth around the carrier frequency, depending on modulation type. Some of the commonly used modulations for audio signals are AM (amplitude modulation) and FM (frequency modulation). Each country has an authority that takes care of the frequency regulations. They determine at which carrier frequency stations’ data can be transmitted and make sure that different stations are not overlapping. For example, in the USA FM stations take space between 87.8MHz and 108.0 MHz. This band is divided into 101 channels, each 0.2MHz wide.

A radio receiver is an electronic device that receives radio waves using an antenna and converts them to alternating currents. The desired information is then extracted from this current. The receiver uses analog filters to separate the desired radio frequency signal from other signals picked up by the antenna. The analog filter is followed by an amplifier which is used to increase the signal’s power. Then finally demodulation is carried out to get the original signal. Information obtained in this way can be sound, images or data.

In various industries radio receivers can be used to acquire different types of information. To make this topic simpler to discuss, for the remainder of this article we will focus on a radio receiver’s functionality known in consumer electronics. This implies receiving and reproducing sound from radio broadcasting stations (AM or FM).

As explained in the introduction a specific channel of interest, an FM radio station in our example use case, is transmitted at a specific carrier frequency with a specific bandwidth. It is transmitted together with many different channels of information, all at different carrier frequencies. To be able to play the radio station, we need to do the steps mentioned in the transmitting phase in reverse order. That means that the signal first needs to be translated from higher frequency to the baseband. The next step is demodulating it so that it can turn back to its original form.

Let us observe the hypothetical FM broadcasting scheme given in Figure 1. Every station takes 200kHz bandwidth but all of them are transmitted at different carrier frequencies. To listen to FM Station 3 the radio receiver needs to obtain its specific 200kHz of information. This was done using a process called tuning in early receivers where the frequency of the receiver was adjusted to the carrier frequency of the channel of interest.

However, due to the lack of components able to do frequency selection besides the antenna itself, the bandwidth of the receiver was equal to the bandwidth of the antenna. This meant that receiver would accept many different frequencies and not only the ones between 99.9MHz and 100.1MHz that we are interested in. Hence, the receiver would pick up information from the surrounding different stations seen in the figure below. This resulted in bad reception since our data of interest was overlapping with data from other channels of information. 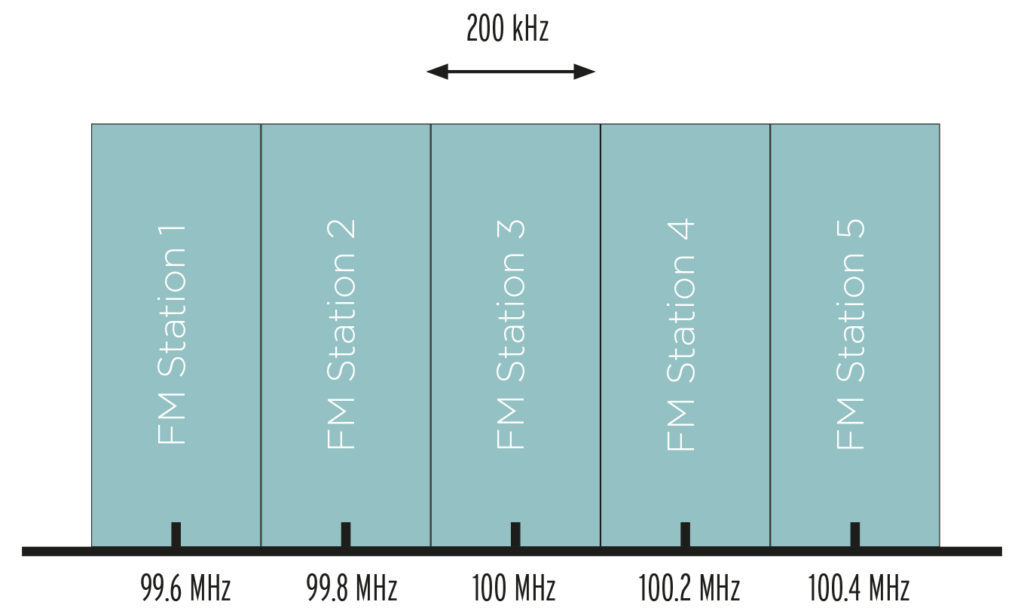 With the development of the tuned circuit, it became possible to extract only the desired channel’s frequencies. This was done by placing a tuned circuit between the antenna and the detection system of a receiver. The tuned circuit acted as a bandpass filter. Capacitance and inductance of the circuit determined the frequency of the tuned circuit. This meant that to listen to different stations this bandpass filter would need to change its passband depending on the radio station desired and its carrier frequency. The result of this filtering is that the frequencies of interest are kept as close to their original form as possible. All other frequencies are still present but with significantly lower amplitudes.

The drawback of this type of receiver is that the channel of interest would remain at a high frequency and the higher a frequency is, the more difficult it is to create efficient filters with good selectivity. Moreover, different stations require different filters. The introduction of superheterodyne receivers helped with overcoming these issues.

Many industry radio receivers nowadays use the superheterodyne architecture. Signals centered at a high radio frequency is first “shifted” to a lower frequency, a so called Intermediate Frequency. Only after this, processing takes place. It is IF signal that goes through filter and demodulation stages instead of a very high frequency RF signal. With this type of receiver, different radio stations are shifted to the same intermediate frequency. Given that different radio stations have same, standardized bandwidth, a unique filter can be used to extract only the channel of interest.

The invention of transistors and the development of integrated circuits led to the big changes in how receivers work nowadays. Many of the functions previously done by analog electronics are now done using digital circuits on a chip. Different hardware platforms were created for Digital Signal Processing on chip. Some of them include FPGAs, ASICs or dedicated Digital Signal Processors. All of these can execute signal processing operations much faster than general purpose processors (CPUs).

The process of receiving radio signals today means that the signal is digitized at the Intermediate Frequency. Afterwards, it is bandpass filtered and demodulated using Digital Signal Processing on the chip. This type of receiver is also known as Software Defined Radio. Its advantages include the possibility of dynamically changing the properties of a receiver such as filtering and demodulation type. It is important to say that the sample rate of the analog to digital converter is often much higher than the bandwidth of channel of interest.

To understand the additional steps that must be done in the digital domain, we will refer to the radio signal example described before. Let us assume our Analog to Digital Converter has sample rate of 50MSps. The signal of interest has 200 kHz of bandwidth as mentioned above. After digital filtering is done the amount of data remains the same. However, the frequencies belonging to the channel of interest are unchanged and the frequencies belonging to other channels will be significantly attenuated. After this, demodulation needs to be done.

There are two ways to do this. One of them is in the chip and the other on a Windows computer that receives the filtered data from the chip. However, the amount of data is extremely high for Windows processing and therefore a reduction of the sample rate needs to be carried out. This process is called resampling and it changes the sample rate of data in such way that all information of interest is saved, and all other information is removed. In our case, resampling would lead to the sampling frequency of 200kHz since this is all that it takes to preserve all information for one FM station. The only thing remaining after this step is demodulation.

The process of filtering out the unwanted components of signal from its original form and reducing the sample rate to the minimum required by the signal of interest is called channelization.

Given that the initial sample rate in our example is 50MHz and the extracted channel is 200kHz we reduce the amount of data by 250 times. Since this saves us a huge amount of processing power on the Windows side, it is possible to extract more channels using a single chip and process them together.

To be able to process and extract many channels in parallel from a wideband input can be very beneficial for a number of applications such as signal surveillance of communications, radar and GNSS. By using FPGAs, thousands of signals can be extracted from a wideband signal in real-time. If the capability of streaming the channels to different UDP ports is added, numerous use cases benefit in terms of used hardware.

The simplest example of this scenario would be listening to FM stations. As stated earlier, the USA has 101 FM stations and in order to listen to all of them, traditionally, 101 different receivers are needed. If we had one receiver and an FPGA chip capable of channelizing and streaming 101 channels at the same time instead, one receiver would suffice. Hence, hundreds or even thousands of channels can be obtained using only one receiver and costs can be reduced. 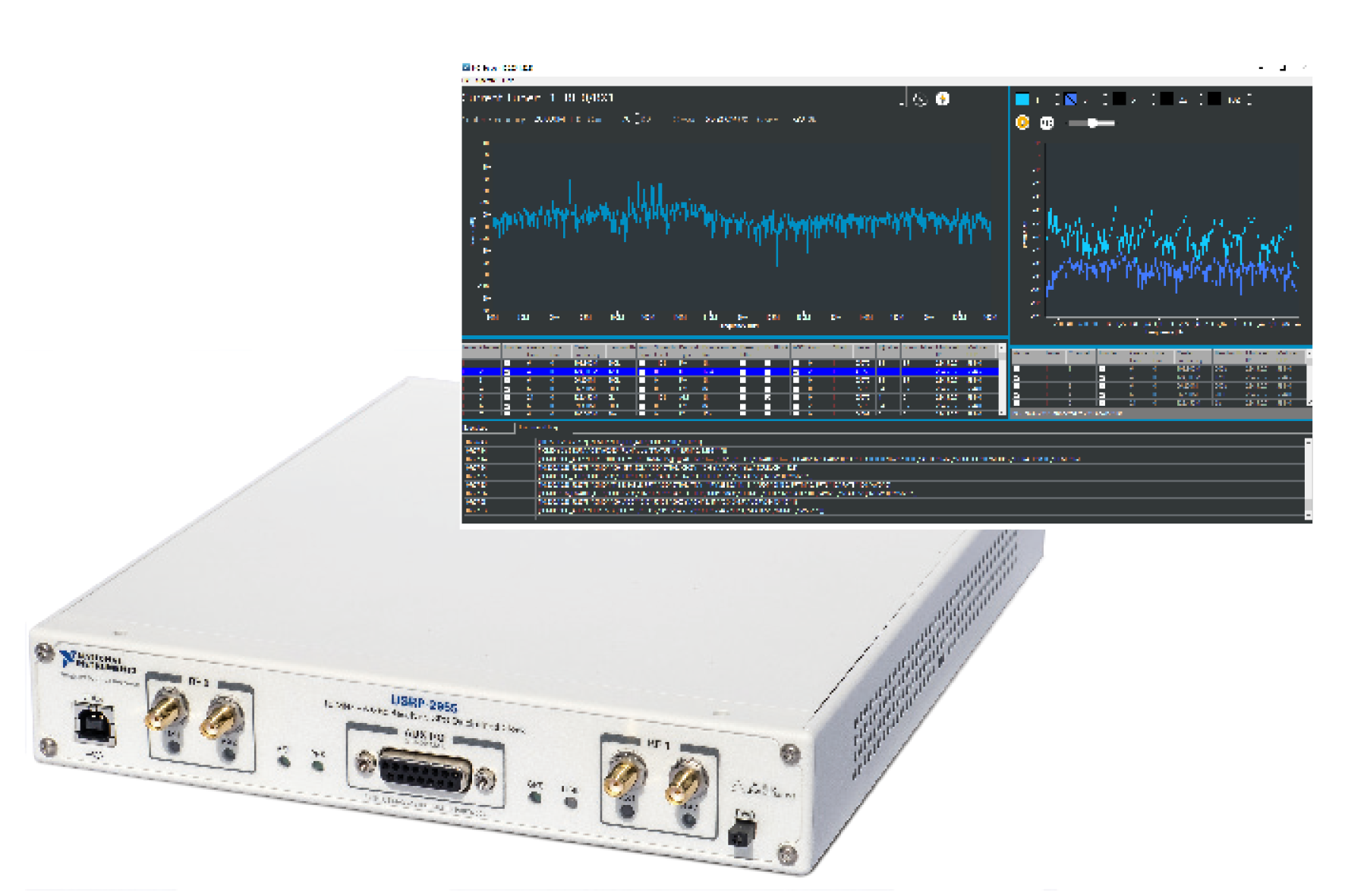 Do you have questions about our products or need help with your purchase? Don’t hesitate to contact us by phone, email or by filling in the contact form. We look forward to hearing from you.