Natural and man-made interference to the GNSS pose a serious threat to safety of life at sea. Novator Solutions has mitigated this threat by enabling the transmission a different methods of providing correction signals based on COTS National Instruments hardware modulators. Novator Solutions R-Mode Modulators were delivered to a government customer for tests in the EU beginning in 2015.

To achieve higher accuracy when using the GNSS for positioning, a differential GNSS (dGNSS) system can be used. The GNSS includes the well-known Galileo, GPS, GLONASS, and BeiDou systems. Corrections from known positions are also used instead of simply relying on the GNSS receiver. These corrections are sent to the dGNSS receiver in the form of RTCM messages from stations at known positions.

Traditionally, corrections in the RTCM messages have been calculated at the station using a GNSS antenna. Thanks to advances in technology and infrastructure, this is no longer necessary. Instead the corrections can be calculated elsewhere and then be sent to the station, which in turn broadcasts the messages.

High-precision positioning in the maritime domain is now the norm since the introduction of GNSS. Unfortunately, it is well known that as GNSS systems are low-power, satellite-based systems, they are vulnerable to interference (both naturally occurring and man-made). This is why an alternative backup system is recommended, and Ranging Mode (R-Mode) is the ideal solution. 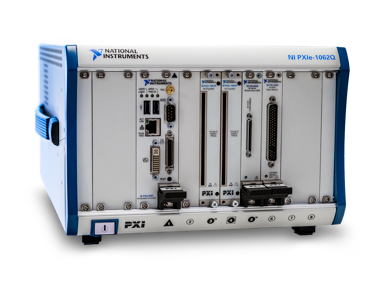 The Novator Solutions R-Mode Modulator for broadcasting received messages is based on National Instruments’ PXI platform. A PXI system consists of a chassis, a controller, and different IO cards. The PXI runs on a Windows computer with one or two FPGA boards for the signal generation.

The Novator Solutions R-Mode Modulator software runs on PXI hardware. It receives RTCM messages over an Ethernet-based communication protocol (such as TCP/IP) as well as RS232 serial communication. The received RTCM messages and the selectable R-Mode CWs are modulated into an analog signal, which can be amplified and broadcasted by an antenna.

The generated analog output signal of the R-Mode Modulator is composed of a minimum-shift keying (MSK) signal and one or two CW signals.

The Novator Solutions R-Mode Modulator system is a stand-alone system that needs no extra computer after initial setup. The system is fully configurable, and remote connection tools can be used to select the signals mixed for the signal output as well as their frequency specifications.

The Novator Solutions R-Mode Modulator delivers a complete ready-to-run system including PXI hardware and software. The system can be set up to automatically generate alerts by e-mail or text message when an error is detected.

Based on customer requirements, the system can be extended with I/O functionality for power transmitter monitoring and control, etc.