Hardware-In-the-Loop-simulation, or HIL, is a very powerful test methodology used for systematic testing of embedded software.  Using a broad definition, one could say that an HIL system is a test system where the embedded software under test is executed on the same control unit (ECU, micro controller or other type of embedded control unit) that it will run on in its intended end application, and connected to the same physical interfaces as it will use to interact with. The signals on these interfaces only lead to and from the test system, though, and the test system emulates the rest of the surrounding environment. Identical signals that the control unit will experience are read and written by the test system instrumentation. Environmental components that would affect these signals are simulated by software in the test system, often created by modelling languages such as Simulink. A more strict definition that is often used is that the embedded software under test, and the surrounding models, should execute with real-time accuracy corresponding the real working envrionment that the control unit will operate in. This is fully possible, but places higher demands on the hardware and software used to build the test system. 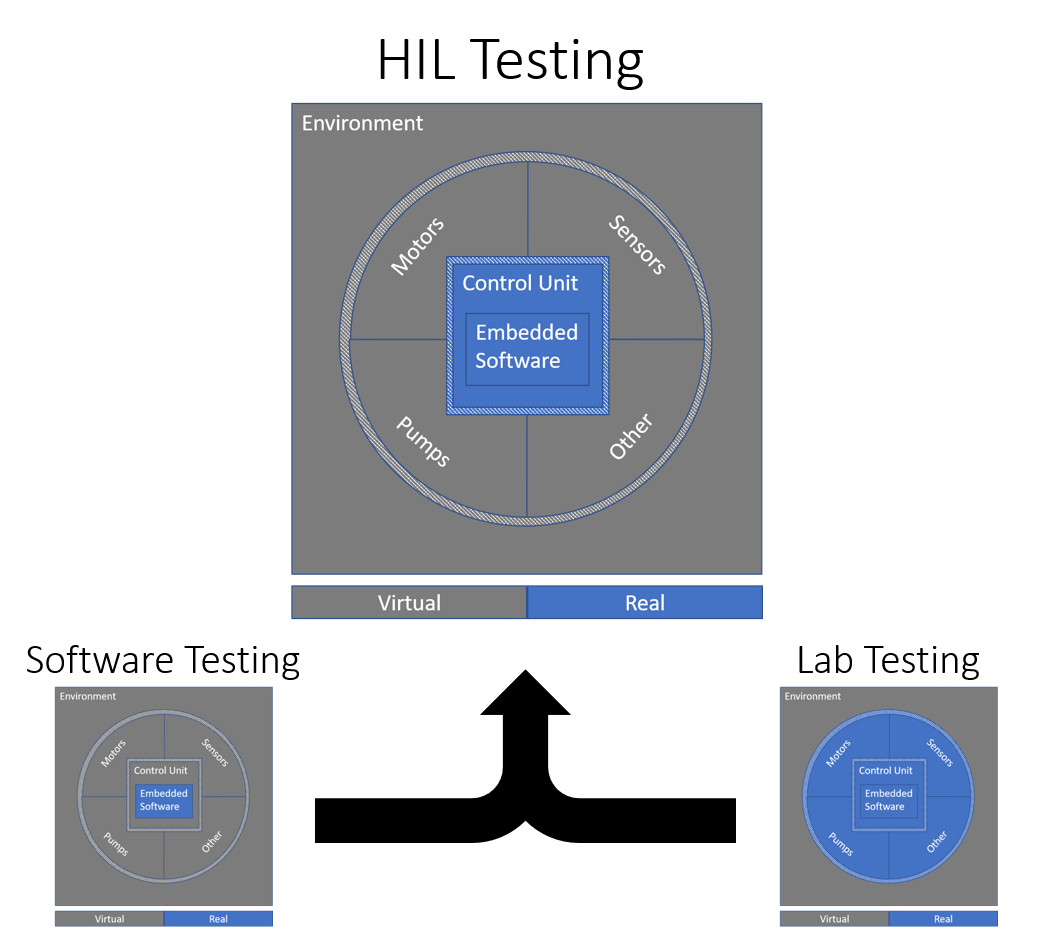 HIL gives superior insight into how an embedded control unit will behave in its deployment environment than pure software testing, but with a test coverage that is difficult, and sometimes even impossible, to acheive with physical testing.

Building a Hardware-In-the-Loop system demands the same knowledge about testing as conventional software testing. The designer must know how to create relevant and well implemented test cases with high test coverage of the desired functionality. On top of this, and HIL system requires equally good understanding of instrumentation, measurement technology, communication protocols, real-time computers and model execution. And last of all the knowledge of how to incorporate all these components into a well working test system. To maximize the benefit, an HIL system should also be able to handle regression testing of new versions of the code automatically. For example retrieving, deploying and executing code from a Jenkins build server. Novator Solutions has experience in implementing all of these components.

HIL in the development process

Hardware-In-the-Loop systems have traditionally been considered expensive investments that only pay off where the product is governed by strict safety standards. As a result, it has primarily been used in the automotive and aerospace industry. This is not necessarily true anymore. First of all, HIL systems can lead to such dramtic improvements in the development process, that the investment can pay off in just a few months. HIL testning provides a superior insight into how an embedded system will behave in its deployment environment that software testing cannot achieve. But it also provides a test coverage that is difficult, or even impossible, to acheive with physical testing. For example it is possible to test situations that go above and beyond limitations that surrounding physical components might safely apply before braking or creating risk for the test personnel. It is also possible to stress test scenarios that would be hard to recreate in a realistic time frame in physical test setup. Also, an HIL system can be combined with physical testing while waiting for other subcomponents to be developed. This makes it possible to start with testing at an earlier stage, which can significantly reduce the need for expensive and time consuming lab and field tests, since bugs can be detected earlier.

HIL systems can be configured to combine simlated and physical system components.

The HIL market has changed

Second, the Hardware-In-the-Loop market has changed. There used to be few suppliers and modest competition. The suppliers were niched to a small set of industries, which prevented benefits of scale. Most systems were also fully proprietary, with minimal insight and possibility to customize systems. The suppliers took extensive responsibility for the functionality of the system, but applied substantial service fees, even for very minor changes. National Instruments hardware platforms PXI and CompactRIO can both be used for HIL testing, but also in other types of test and measurments. This lowers the production cost per unit for the necessary instrumentation, and CompactRIO enables HIL systems for a fraction of the cost normally associated with these types of system. These hardware platforms, as well as some software components from an HIL system, can also be used for Rapid Control Prototyping (RCP). This can briefly be described as the inverse of HIL: The control system is replaced by instrumentation and a model of the control system. This can then be used to validate the functionality and its algorithms in a lab or in the field. You can read more about RCP here.

When Novator Solutions develop HIL systems, based on the mentioned hardware platforms and the softwares VeriStand or LabVIEW, you as a system owner have full insight and indefinite user rights of the software. We offer support agreements to ensure long term maintenance and longevity, but you retain the possibility to do future development independently.